After missing the last few years without a review, we have decided to do a running review that is updated as it happens at Leeds Bradford. With 2019 being mostly doom and gloom we are hoping for a better year.

1st: We didnt have to wait long for a first visit of April, only 9 hours infact. Gama Aviation Beech 200 G-GMAE arrived and departed on an ambuance flight to Glasgow. Another first visit was G-VNAV Diamond star DA-62 that preformed a number of ILS throughout the day.

5th: An unusual visitor arriving from Hebridies was BN2P G-HEBS, possible related to the Coronovirus outbreak.

3rd: A very good day with 3 new business jets to grace the tarmac at Multiflight, first up was American Challenger N157PH from Dublin. Secondly Clevewood Aviation sent us Citation C525 CJ2 2-CLEV arriving from its base at Belfast before departing for Kerry. Lastly Global Express 5000 l-GLZ (ex N103QS) arriving from Edinburgh then departing to Nice.

7th: Just the one addition to the newbie list as Austrian  Cessna 510 Mustang OE-FOE visited for the first time.

15th: Finnish challenger 604 OH-WII made a first visit from Africa before heading home.

19th: Nice movement from M-ETAL P180 that visited from Chester and departed to Biggin Hill.

22nd: Cessna Citation C510 M-OUSE arrived from Keflavik and departed for Nice on its first visit.

24th: The last decent vistor for March was thisDanish Falcon 7X OY-EJD that came in from Antigua and departed for Sonderborg.

At Yorkshire Spotters we please advice essential travel only. As much as you want that special movement that comes into LBA or surrounding airports please dont go and get it, stay at home! Help us all save lives and get the country and world back to normal so we can continue our fantastic hobby.
Mark and Danny.

Greggs have announced they will open a shop in the terminal in the summer. The shop will be situated next to arrivals landside, in a similar place it was before.

As of 0001 on the 5th of March, Flybe have gone out of business. LBA had a 5x daily service to Belfast City and 2x weekly service to Newquay. As well as previous routes they tried including Aberdeen, Southampton, Exeter and Gatwick before getting the axe. This is an airline that has been operating to LBA for many years, even in the form of Jersey European and British European. Our thoughts are with the employees and familys at this very difficult time.

Looks like Ryanair will return the second based aircraft back into LBA for the winter 2020/21 schedule with return of some of the flights axed for Summer 2020.

2nd: The one to make the first visit in February is Stobart Air ATR 72-600 EI-GPN (ex G-FBXC) from Dublin. This was one of the ex SAS ATRs that failed to turn up to LBA on training flights.

3rd:   The second visit for February was Enter Air SP-ESB Boeing B737-800 arriving from Oslo for a nightstopper.

4th:  Two newcomers this day, first up was Beech 200 G-NYCO from Waterford and secondly was Canadian Learjet 45 C-GEJD from Keflavik.

5th:  Cessna 172 N668CS arrived from Blackpool for maintenance and Malta Air 9H-QCN arrived from Malta for the first time and was previously Ryanair EI-GJO which last visited Leeds on 25 May 19.

8th:  Jet2 737 G-DRTR arrived for the first time  from Alicante after a swap on the Manchester service in Spain. This particular 13 year old aircraft is ex  Air China B-5175 and had served with them since delivery from Boeing.

13th: German Embraer Phenom 300 D-CROG came and went during the day to make its first visit.

14th: One thats visit before under a previous identity many times but has been re-regged by Loganair is Embraer E145 G-SAJF (ex G-RJXE) that landed from Bristol on a football charter against the mighty whites. Ryanair sent in SP-RKD for its visit visit from Wroclaw.

27th: Just one to note this day with French Air Force 160 TBM7 arriving from its base in Besacon and departing for Staverton.

January
4th:   The first newcomer to visit this year was Embraer E135 Legacy G-ERFX (ex N910FL, N910FL) from Stansted  departing the same day for London City
.
10th: Cessna C182 G-THYB was a first visit from Cork for attention with Multiflight SP-RKE joined the registration newcomer list from the Polish arm of Ryanair.

14th: The first diversion into LBA came in form of HA-LYN A320 of Wizzair, making two attempts at Doncaster with no luck they headed for Leeds. SP-RSZ also joined the list of new registrations to visit LBA.

15th: A first of a new type of aircraft to grace LBA for 2020, N56EL Gulfstream G500 landed from Madrid the day  also brought Ryanair 737 EI-GXJ in on its second visit positioning in empty and Dassault Falcon 2000 F-HLPM on a first visit from Paris LBG.

16th: Another first visit this time PC-24  9H-CFB  from Antwerp,  and only the second visit of the aircraft type to LBA. Also joining the guest list was Agusta Westland AW139 277 of the Irish Air Corps on a first visit from Baldonnel.

17th: Was late in the day for German Learjet D-CPMU to make a first visit from Ankara. Also making its first virsit was Royal Air Force A400M Altas ZM416 making two ILS approaches before departing back home to Brize Norton.

19th: Enter Air Boeing B737-800 SP-ESE mades its first visit from Bournemouth before departing to Enontekio on a charter. Also making its first visits were Citation C510 F-GMTJ from Paris that was a football diversion from Liverpool and C525 D-CUGF

22nd: A surprise visit from LOT Embraer E190 SP-LMC on diversion from London City. Embraer 100 D-IAAS also made a first visit from Paris.

26th: First visit in a few days from Enter Air SP-ENZ operating a charter from Enontekio and departed for Bournemouth.

Jet2 will base an Air Europa Boeing B737-800 at LBA this summer no doubt operating a number of spanish routes.
A decrease from 4 flights last year to 3 flights this year on the New York Newark christmas flights with a Boeing B752. Over the pennines in Manchester they have increased from 6 flights in 2019 to 14 this year with a Airbus A332.

The airport has made a surprising announcement with a 150million planned terminal. The new 3 floor building will take over the exsisting terminal building that will be demolished. This is part of a plan to get Leeds Bradford to where it belongs and aiming for the 7million passenger figure. The new terminal will be constructed down on the "new stands", which is located between stands 19 to 24. Also the new terminal building is closer to Horsforth what means a railway line is more likely to be implemented. 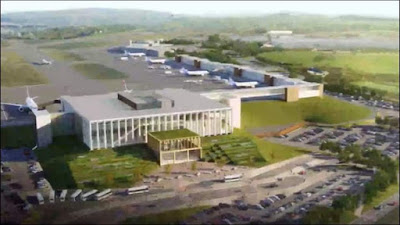